CSER’s CdTe thin film solar cell on cover glass is now orbiting the Earth. AlSat Nano was launched from Southern India on 26th of September and deployed into a 690 km polar orbit. After a series of spacecraft health checks and in orbit commissioning procedures by SSC operations were then transitioned to Algeria’s newly developed AlSat Nano ground station in Oran. A few weeks later the first data was received from the TFSC payload signifying a world first in the measurement, in space, of a solar cell deposited onto cover glass. The TFSC, when commanded, measures the non-linear current-voltage response of 4 experimental 1cm2 cells in orbit when under illumination by the sun. It also measures the ambient temperature and sends all data to the AlSat Nano’s on-board computer. As the CubeSat passes within range of the ground station in Oran, Algeria the on-board computers data is downloaded and then distributed to the various end users including the TFSC payload team. 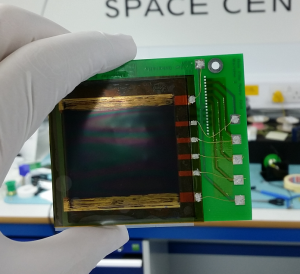 CSER CdTe solar cells on cover glass and mounted to PCB
Links
https://www.gov.uk/government/news/launch-success-for-alsat-nano
http://www.telecompaper.com/news/algeria-launches-3-satellites-from-india–1164165
https://www.youtube.com/watch?v=_5AFwxnNxAU
This brochure shows you how the AlSat Nano is integrated into the launch vehicle 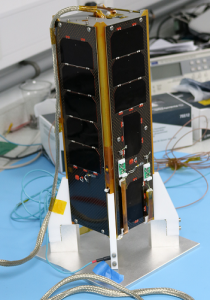 The Centre for Solar Energy Research was selected to take part in the UK Space Agency’s September 2016 CubeSat mission.  The AlSat Nano is a joint space mission between the UK Space Agency and Algerian Space Agency (ASAL).  CSER’s successful selection, following a presentation to the UK Space Agency in Swindon by Dr Dan Lamb (project leader), offered a fantastic opportunity to “flight test” their innovative Thin Film Solar Cell.  The programme was committed to a tight time schedule and CSER in partnership with the University of Surrey delivered their payload to the CubeSat manufactures by September 2015. September 26th 2016 saw the successful launch of the AlSat Nano with the Thin Film Solar Cell payload on-board. Now its performance will be systematically measured and the data beamed down to mission control.  The CubeSat is expected to generate data for at least one year which will be invaluable for producing high quality publications, securing further funding for the research and promoting Swansea University’s contribution to space science. 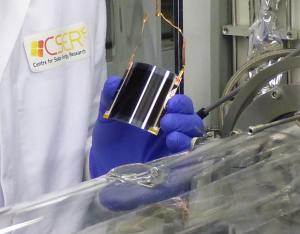 This space experiment arose from CSER’s EPSRC funded research project aimed at developing a new solar cell technology for use in Space.  In collaboration the University of Surrey and industrial partners Qioptiq Space Technology (QST) and Surrey Satellite Technology Ltd the development of the project developed a new solar cell technology to meet the emerging demands of large area solar array space applications.

CSER’s Cadmium Telluride thin film solar cell was directly deposited onto a cerium-doped cover glass which is just 1/10th of a millimetre thick. This cover glass is space qualified, designed to withstand the intense radiation environment and is the standard protective cover on solar panels for satellites.  QST are the World’s sole supplier of this product; any solar cells destined for extraterrestrial use must have this glass bonded to the illuminated surface.  The cover glass absorbs the high intensity radiation that would otherwise darken any standard glass and damage the semiconductor layers making-up the solar cells.

CSER’s innovative step uses its expertise in semiconductor thin films, to deposit the thin films for the solar cell directly onto the cover glass thus saving on the weight and cost of also having to use a substrate material. 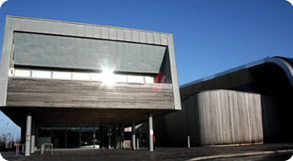